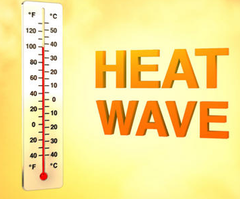 Snow accumulation during the winter season can lead to flooding during the early spring if conditions are right. When temperatures rise, snow melts and turns to runoff. Ice jams that have accumulated in rivers also start to move with the melt. This can be a gradual or very quick process depending on temperatures. When this process combines with precipitation events and frozen ground, the spring thaw can become a serious flood event. 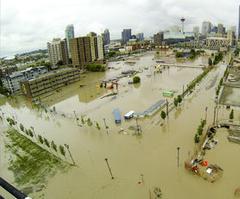 ​​A heat wave is three or more consecutive days when the maximum temperature is 32°C or more
​https://ec.gc.ca/meteoaloeil-skywatchers/default.asp?lang=En&n=7884CDEA-1&def=show1BED14A34#BED14A34 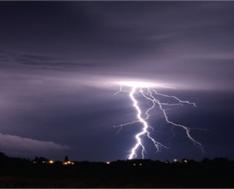 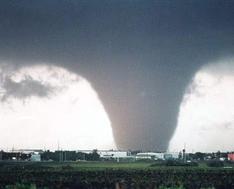 ​A tornado is a violently rotating column of air extending between a cloud base and the surface of the Earth. Most tornadoes form from thunderstorms. You need warm, moist air from the Gulf of Mexico and cool, dry air from Canada. When these two air masses meet, they create instability in the atmosphere. A change in wind direction and an increase in wind speed with increasing height creates an invisible, horizontal spinning effect in the lower atmosphere.
​http://www.weatherwizkids.com/weather-tornado.htm

1. Hail Storm in Calgary (2010)
In the summer of 2010, Mother Nature walloped the city with hailstones nearly four centimetres wide that dented cars and damaged homes. At the time, the storm shattered records, becoming the most expensive hailstorm in Canada, with damages costing around $400 million.
2.  F5 Tornado in Elie, Man. (2007)
At 300 metres wide, travelling near Elie, Man. at speeds between 420 to 510 kilometres per hour, the tornado ripped across 5.5 kilometres for around 35 minutes. While utility poles and trees were damaged and a house was carried off the ground and exploded in the air, no one died from the event.
3. Pine Lake tornado (2000)
The deadly F3 tornado came crashing down in the Pine Lake area near Red Deer, Alta. There were reports of hail the size of oranges and a campground and trailer park destroyed by the twister. When the funnel clouds dispersed, 12 people were dead and more than 100 were injured.
4. Edmonton tornado (July 31 1987)
An event also known as Black Friday to Edmontonians.  The tornado remained on the ground for an hour, cutting a swath of destruction 40 kilometres (25 mi) long and up to a kilometre (0.6 miles, or 3000 feet) wide in places, and peaking at F4[2] on the Fujita scale. The tornado killed 27 people, injured more than 300 people, destroyed more than 300 homes, and caused more than $332.27 million CAD ($597 million in 2015 dollars[1]) in property damage at four major disaster sites.
5. Big Valley Plow wind Aug. 1 2009
Environment Canada said the plow winds were in excess of 100 km/h and were so violent that some people mistook them for a tornado or hurricane. The winds hit with only a minute’s warning and caused the main stage to crumble as thousands of spectators fled. One person was killed and another 75 people were injured.

​Thunderstorms form when hot, humid air raises rapidly. As the air cools it condenses and forms cumulonimbus clouds that can reach heights of  over 20 km. Thunderstorms are often accompanied by high winds, hail,  lightning, heavy rain and tornadoes.​